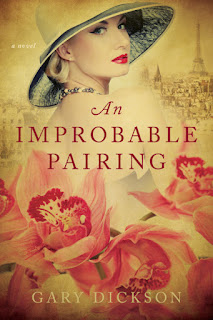 I received this book to review and was very interested. An Improbable Pairing by Gary Dickson, is about a May-December romance that occurs when a graduate student named Scott Stoddard goes off to Geneva, Switzerland in September of 1963 to study international business at the University of Geneva. By chance he meets the Countess de Rovère, a beautiful but slightly older woman of means that catches his eye and becomes an obsession of his. He eventually calls on this woman, after a failed attempt at one relationship, and they almost instantly fall in love.

There are two reasons I am interested in this book. One, I went off to study in Paris as a graduate student when I was 23 in 1993 and I met the love of my life, a Greek man whom I brought back to the United States and married. We had two beautiful children together until our divorce last year whereupon I began dating younger men who love to date women much older than themselves. While this differs slightly than the book, I can relate to it because I too enjoy the company of a younger man. There is something about their vitality and exuberance that catches my eye and makes me want to be with one.

The book goes on to record their romance and it discusses how it blossoms over the course of a year, from infatuation to full blown love. However, all do not approve of their affair. For one, there is the Countess' ex-husband, Stefano, who would like to win her back, as well as her mother, who has reservations about the romance in general. Not to mention Scott's down to earth, but rich parents! The book goes on to discuss how they maneuver about going through their friends and loved ones consternation as they decide to get married. He is a Baptist and she is a Catholic with an annulled marriage.

An Improbable Pairing is a historical romance that chronicles the enduring themes of a young man’s coming of age and the rebellious love that is  mismatched. This pas de deux, set in the golden years of 1960s Paris, Geneva, Gstaad, and Cannes, provides an insider’s peek into the world of haute couture, three-star gourmet restaurants, and lavish hotel suites, the domains of esteem and entitlement. But society’s privileged resist when an uninvited guest threatens to upset their cozy structure.

You will have to read the book to find out its conclusion. Do they become engaged and get married? Are they able to find happiness? Or, does society dictate what must become of their love affair and it dwindles away like the leaves of autumn like any other May-December romance that ends prematurely and with heartbreak.

I really enjoyed this book and couldn't put it down. I found the information about 1960's Paris quite captivating and I loved comparing it to the 1990's Paris I knew and loved. Although the novel took place over 50 years ago, it could happen just as well today. I also loved hearing about how the rich lived in Europe, that part always fascinated me. It is very different from how the rich live in NYC.

Marie Papachatzis
I Am THE Makeup Junkie
Follow Me On Instagram:iamthemakeupjunkie