Happy Singlehood: The Rising Acceptance and Celebration of Solo Living
$29.95 US/£ 24.00 paperback 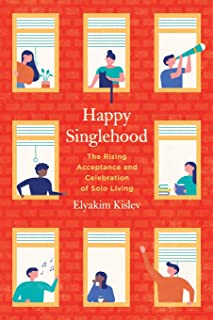 Living the single life used to the death knell for anyone over 30. Women were considered "spinsters" and men, "confirmed bachelors". In the year 2019 however, things have changed and it is perfectly acceptable to live single now and not only to live a single life but to be happy about it. Don't want to be married and have children? All the more power to you! Eylakim Kislev discusses how times have changed in societies, why singles are now accepted as "normal" if they want to live alone, how this has changed public discourse and how it should change the way educators, policymakers, and urban planners should cater to their needs. Happy Singlehood: The Rising Acceptance and Celebration of Solo Living is a complete sociological look at how single people overcome obstacles, nurture social networks, create innovative communities, and effectively deal with discrimination.

If you take the average city and its population size, data from the 2000 census shows there are at least 5,000 single, never married people per capita than say 2500 separated/divorced people, almost 2,000 married people and a little over 2,000 widowers. I am sure the numbers will have changed some in the census that will come out next year and I think the numbers for singles will have increased with the rise of the millennial population. This is an issue that is all over North America and Europe. One thing about singlehood too is that singles tend to work hard, long hours and then play hard long hours too. They have more disposable income, so they can use that income in discretionary ways, such as travel, electronics, beauty & skincare and items on one's home.

As one ages, being single,  one would need to rely on a social group of same-like minded people. In old age, you will be lucky to find the same people in an assisted living facility. But until that time, make sure to have lots of friends who have the same interests as you do. Wine tasting? Sounds heavenly. Book club? I love to read. Shoot pool? Sure. Brewing beer? Why the heck not! There is no end to the things you will find in common with others.

Cities are going to have to adapt to single life now that people are choosing to stay single longer or to just stay single. Mr. Kislev makes a great argument in the book that states single people are increasing in numbers, are not to be afraid of and are just like anyone who is divorced. They just didn't tie the knot yet. Sometimes that is the way I feel. Then I remember I have two teenage daughters.


Happy Singlehood is available from www.ucpress.edu,www.barnesandnoble.com and www.amazon.com.