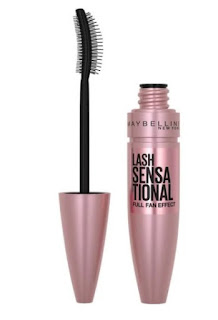 This mascara is not new for Maybelline, but they have a new color out, called Midnight black. In fact, this mascara has been out for a few years and is a fan favorite. It is in fact, one of my favorite mascaras. Definitely my favorite Maybelline mascara.

To use: Use inner curve of brush to reach the roots of lashes. Sweep from the roots to tip of lashes. Do not let mascara dry in between coats. Mascara easily removes with any eye makeup remover.

It gives very long lush lashes that are clump free and are gorgeous. Theses are some of the longest lashes I have had with a mass market mascara. Eyelashes grow in more than one layer and this mascara helps to show those layers. It reveals layer upon layer of lashes. This mascara is also washable, meaning it washes off easily with any eye makeup remover. It has a curved brush, so start with the inner curve and fan outward to get the best results. I happen to have the shortest, stubbiest lashes in the world. They are invisible and mascara is not my friend. I don't have luck with many of them and find that I normally have to pay top dollar to get a really good mascara but with this one I liked it remarkably well.

Here are two photos, one with my lashes before and one after wearing the mascara: 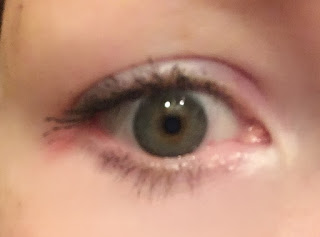