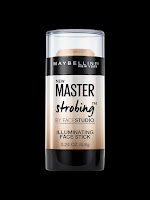 One of the biggest makeup trends right now is called strobing. What is strobing? Strobing is highlighting areas of the face, in a clean, not over-the-top way. It's about adding light to the face where it's needed. It's not about adding "excess" to the face. Areas to highlight are the cheeks, right at the top of the cheekbone, under the brows, the nose, the forehead and the chin. Strobing adds dimension to your face. It can slim your face down and it can add contours to the face with highlights.

One of the best ways to accomplish this is to use Maybelline's Master Strobing Stick by FaceStudio. It comes in two shades, 100 Iridescent and 200 Nude Glow. The Iridescent shade is a light pink shade and Nude Glow is a peach shade. Honestly, I like both. For my fair skin it would be recommended that I would use the Iridescent shade and that deeper skin tones would use the Nude Glow shade. However, I also think it depends on what skin tone you have too. I think that warmer skin tones can use the Nude Glow shade and that cool tones can use the Iridescent shade. The Master Strobing Stick has micro-fine pearls and a creamy formula that make you look as if your skin was lit from within.

What I love about this product is that it's just the right amount of glow. Not too much. Your skin looks lit from within, like it is supposed too, not overly done with highlight. You can see both in the photo below. I think it depends on your mood and what kind of highlight you are after. Personally, I love both of them. 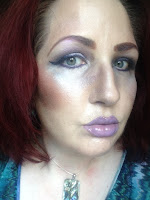 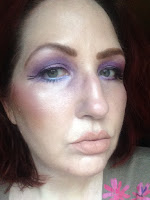 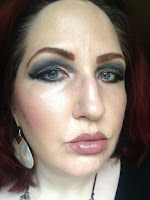 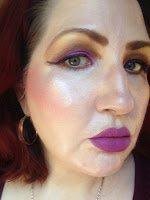 (above: wearing Strobing Stick 100 Iridescent in all photos)

Maybelline Master Strobing Stick by FaceStudio retails for $9.99. It can be purchased online at www.maybelline.com and at mass market retailers nationwide, such as Walgreens, Rite-Aid, CVS, some Bed, Bath and Beyond stores and Wal-Mart. It works really well when worn with Master Contour by FaceStudio (review to come).

(These were sent for consideration)