Chafing, going commando and swamp butt. What to do for your man so he doesn't get swamp butt...#chafing #goingcommando #SwampButtUnderwear 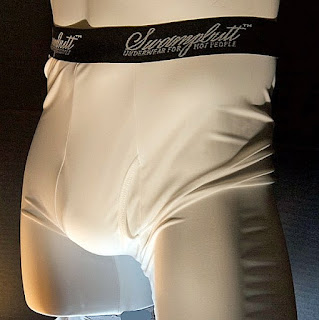 Call it ‘free balling’, ‘going commando’ or ‘floppin’; men who do not wear underwear during spring break, or any other time, are at far greater risk of infections from swamp chafe, that the chaffage ensues according to the Internet and a conversation overheard in the men’s room late last week. The makers of SwampButt Underwear™ offer this announcement as a public service for men and boys who think that not wearing underwear is a good idea.
Chafing is a skin problem caused by friction, moisture, and fabric that irritates skin because of excessive rubbing that leads to even more friction. Not wearing underwear will lead to some serious ‘chaffage’. Men develop chafed skin on body parts that rub against each other or against clothing. Free balling begets all of those. Under commando conditions, chafing occurs on the thighs, the crotch, associated crotch parts and buttocks. Prolonged irritation due to chafe makes skin sting, burn, and give the chafed a diaper-like rash and even an infection. If those are not bad enough, there are still other reasons.
Making It Worse
Any man’s junk swinging freely down south may be a fun-feeling novelty for a short stint. But any amount of time, when the boys are unsupported, rubbing against jeans, shorts, or swim trunks, will go beyond uncomfortable.  Any type of fabric like denim, wool, cotton, or poly blends will be scratchy, ruff, and bumpy feeling and that leads to some serious chafe.
Petroleum Jelly Anyone?
Some well-known men’s magazines recommend applying petroleum jelly (also known as the branded Vaseline product) to the ‘area’ prior to not putting on underwear. “There is a lot wrong with that idea,” said jock itch advocate and company spokesman Nick Heraldson. “Vaseline is messy, and it stains. It is difficult to wash or get off of one’s hands though it will come off on your garments in no time. What a hassle when wearing underwear seems so much easier.”
Daylight Savings and Sleep Loss
Science knows that missing sleep is bad for the human brain and will lead to irritability, and poor decision making. As surely as the clock will change to make people late, or early for a day or two, the warmer weather and (seemingly) longer days will help create the conditions for men who ordinarily make good decisions to make a really bad one and that is to go without underwear. “Maybe the sleep deprivation after ‘Daylight Saving Time’ kicks in is to blame,” said Heraldson. “Who knows?” We can’t know the mind of the free-baller, we don’t have the technology. But we do know the likely outcome, and it’s fraught with ‘chaffage’ of the man parts.”
To Learn More
To learn more about SwampButt Underwear and how to obliterate the blight of butt sweat and wipe out swamp chafe before it starts follow us on Facebook at SwampButt Underwear. Also check out www.swampbutt.com for all SwampButt Underwear news.