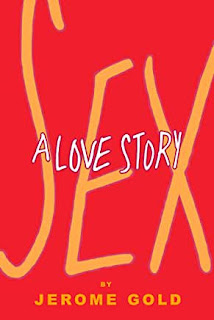 Sex: A Love Story by Jerome Gold is the story of two high school seniors who fall in love with each other at the end of the Eisenhower administration and the beginning of the Kennedy administration. The book falls under the erotica genre. Set in Fullerton, California, it discusses the role that sex plays in the relationship of young adults and how they navigate their love affair with confidence. After having made love everywhere they can and discovering everything about each other, Bob and Jen (the protagonists) ultimately decide to get married as they feel it would be the next step in their relationship. This is the majority of the book, as it takes place in 1960.
What happens next though is well thought out and takes over the plot of the book. Bob and Jen come to a crossroads in their relationship that somehow threatens the fabric of their very well being. The third and final act of the book sets them up meeting in the future, long divorced and Jen pining for what might have been with Bob. Jen is recovering from cancer, still thinking about herself primarily. She longs for a life with someone familiar, someone like Bob, with whom she has been intimate and has had feelings for in the past.
All in all, I thoroughly enjoyed reading about the furious sexual relationship that developed between Bob and Jen. The erotic imagery was palpable and left me feeling as if I could imagine it realistically enough. The characters were well set up and thought out too. Bob is the uneducated yet talented writer who works hard to get to where he wants to be. Jen is the hard working but serious student who has a bright future ahead and who's parents only want the best for her. Each supporting character is well thought out and introduced thoroughly also.
I literally could not put this book down and read it very quickly. It reminded me of my own teenage romps and I miss those days. As the saying goes, "One can never go back again." No matter how much you want to, of course. I am sure you will agree with me that after reading this book you want to frolic in the youthful spirit that is abundantly available in Bob's and Jen's lives.
Available on www.amazon.com starting June 15, 2021.
Until Next Time~
Marie Papachatzis
I Am THE Makeup Junkie
IG: iamthemakeupjunkie
@iammakeupjunkie
at June 02, 2021